If there’s one game that I totally left off my list this year it’s Dying Light. I knew that it was a zombie game but didn’t quite read more on the subject except that they cancelled the older generation versions, which in my opinion didn’t create that much of a fuss when it happened. After it was released at the end of January, I started hearing a lot about the game and reviews were good which really surprised me. I decided to look at some streams and it immediately peak my interest in trying the game. Let’s grab our supplies and explore the zombie infested world of Dying Light.

A major outbreak of an unknown virus has plagued the city of Harran. Having been walled in from the rest of the world, the citizens of this middle-eastern city must fend for themselves with little to no supplies, especially in the Slums which was hit even worse. Kyle Crane, the player, is dropped in the thick of it and is immediately faced with an awkward predicaments, which led to him getting bit. Crane is faced with this situation and must help a group stationed at The Tower, which are the ones that helped him when he got bit. Also working for the GRE, the player must find a man that has files on the virus and get them back to save the entire world from getting infected.

Although the story might seem diluted because of the open world aspect of the game, Dying Light offers an intriguing storyline with twists and turns that doesn’t appear to be too long for its own good. I enjoyed the subtle touches the game offers by giving the player somewhat of range when it comes to approaching certain situations. The story, In my opinion, has a nice escalation when it comes to the progression of things and doesn’t feel disjointed in any regards.

Oddly enough, Dying Light is the first game in recent memories that I had to get accustomed to the graphical design of the game. I don’t know if it’s was the movements of the free-running side of things that was a bit disorienting, but I got the hang of it after about a good 30 minutes of gameplay.

One thing that did bother me a bit is some of the animations while performing parkour. Some of the building grabs, when climbing, don’t line up properly, and it’s usually predominant because you’re pretty much face deep in the animations. It’s not all bad though, in most cases it turns out as planned and really seamless for 95% of the time. Besides that slight hiccup, the game looks stunning and features a nice draw distance with extremely minimal popping. 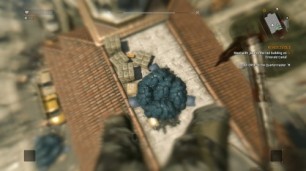 This is going to hurt.

The parkour aspect of Dying Light is what the game is about. You traverse the city of Harran with this method, preferably across the rooftops as much as possible. Like I mentioned in the visuals section, some of the animations look off but beside this point, free-running is well executed compare to other games that attempted to do the same. The character’s movements feel fluent but are not exaggerated, meaning when you fall from a high location you will hurt or kill yourself. The game has landing zones that null’s the damage but does create a couple of seconds where you’re defenseless.

You do get the occasional time where the character doesn’t grab an edge and that inevitably kills you. I had a couple of times where I had to retry certain section because I kept falling and meeting my inevitable death. One of the things I found a bit frustrating when controlling the parkour is the button mapping. Jumping with R1 felt a bit unnatural because I’m so accustomed to X being jump. I wish I could of swapped these 2. 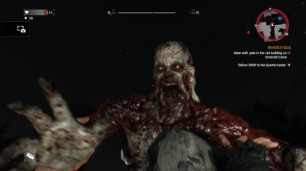 What really impressed me is how many types of zombies that the game presents to the player. You get the usual slow walking zombies, called biters, but you could get attacked by virals, bombers and many more different kind of zombies that will make your life a living hell. Then they’re the Volatiles, these are night zombies that can, at the beginning, kill you in one shot. Their main selling point is that they’re brutal adversaries. When one of them spots you, a group of them converges on your location. Right from the beginning, the game is challenging because of the zombies and that’s great because I was ready for an open-world, zombies oriented game that blends a real challenge.

Dying Light has a compelling night and day cycle which is quite unique compare to its counterparts. At the beginning, the first couple of missions force you to do both so you can get accustom to them, but after the tutorial missions, it has a better balance. Although the night cycle can be almost entirely skipped by sleeping in a safe house, you can gain way more experience points at night because of the difficulty it presents. I enjoyed how natural the transitions feel between day and night. I also like the fact that you do get warning that the night is coming and you should be going inside somewhere.

The city of Harran is a vibrant, well designed map that gives players the opportunity to explore its complex terrain, find hidden loot and collectibles easily, and doesn’t have dead areas on the map. One thing you’ll notice is that they’re isn’t any fast travel in the game, you would think that this would hinder the game but it doesn’t. Personally, I felt like it added to the feel of the game and doesn’t discourage the player to explore. The map isn’t huge, but it has a great layout that helps you traverse it with ease.

If you enjoy a ton of side missions you won’t feel left out with Dying Light, and a majority of them feel unique in their approach. Of course, you get the standard fetch missions but a lot of the other ones are multi-tiered and they really don’t feel like you’re doing the same missions over and over.  You have missions like help survivors that are either being attacked by zombies or army men, collect drops, defend travelers and much more. In my opinion, I found it quite refreshing the way that it’s done in Dying Light, it felt unique compare to many open-world games. 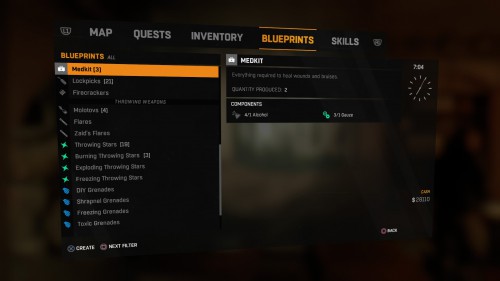 Dying Light is mostly a melee game, of course you have your 9mm pistol and police rifle, but these are not really recommended in the zombie apocalypse, and are only available later in the game. Your main defences are knifes, ice spikes, table leg and anything that will literally have an impact on the situation at hand. The game also has grenades, Molotov and your standard projectiles which do come in handy when faced with a crowd. Damage points from weapons increase while you progress in the game so to not give you almighty power right from the get-go, but eventually you do become almost unstoppable.

The weapons, and supplies, can be crafted by the player when presented with the skills or blueprints. You can add damage types to weapons, create medkits and lockpicks, you can also create specialized zombie appropriate weapons like firecrackers to lure their attention, exploding shurikens(throwing stars) to keep a crowd from gathering and many more items to help you survive.

The weapons and crafting aspect are nice mechanics that are well implemented in the world of Dying Light. It could be a tad more difficult to obtain supplies but they did talk about a hardcore mode coming at a later time. Crafting feels right at home because of how the game is, the weapons you craft look crude, in a good way.

Co-op is where the game can get really interesting. Of course, you have the obvious fact that the game becomes a bit less of a challenge, but also creates great competition opportunities. When performing a task or getting to a location, you can have challenges that appear and when both parties, in my case it was me and another person, agree to the challenge, you get a timer and what needs to be completed. Challenges vary from picking up the most loot to get to the location first. Co-op allows up to 4 players in one team which I was not able to try out but I can imagine that it could probably get crazy with that many people. 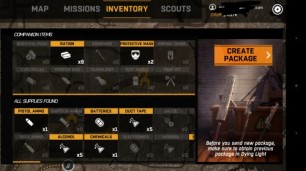 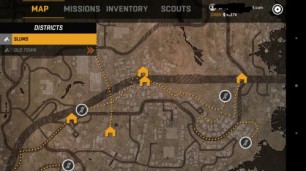 If you don’t have time to pick up a controller and play Dying Light, there’s an alternative. Techland offers the Dying Light Companion app that will help you in the main game by gaining supplies when completing missions in the app. The app is free and has no micro-transactions in the process which is nice because I played a couple of games that had companion app but was behind a small fee. When you try the app, you basically get a detailed map, concept art and a couple other things that don’t really help you in the game that much.

Dying Light app is pretty straight forward when using it: recruit scouts, send them on missions, level them up and get supplies, that’s it. You can then select some of your supplies and send them to your game, which will give you a bit of help. Pretty much any supplies that is available in the game you can get from the app. I don’t usually recommend companion apps but in this case I will because it helps you progress in Dying Light at no extra cost to you.

I played a lot of Dying Light while wearing my gaming headset to capture all the little sounds and environmental noises. I find the audio crisp and pleasing, especially when cracking a hammer in a zombie’s head. The voice acting is fine but nothing out of the ordinary in my opinion. I think the part I enjoyed the most was the background music, which the only way I can describe it is by referring to 28 Days Later, a zombie movie from 2002. The game has that same eery music as that movie and I really enjoyed it.

For a game that I didn’t even have on my list, I had a blast playing Dying Light and I see myself playing for a while. All the features I mentioned work well together and make it one of my contenders for game of the year. If you had doubts about Dying Light, drop them and try the game out, you won’t be disappointed.