When I heard about Middle Earth: Shadow of Mordor at first, I was a bit skeptical because some of the past Lord of the Ring games were not so popular. After the game came out, There was a lot of praise for it, but I still felt unsure because fiction games are not my strong suit. When Black Friday strolled by and I saw that Mordor was on special, I bought it for a good price and started playing it not too long after. What got me mostly intrigued was the nemesis system, which I will explain a bit later. Sharpen your Orc killing skill because it’s time to travel to the lands of Middle Earth: Shadow of Mordor.

You and your family are killed by Uruks of Sauron’s Army led by 3 Black Captains: The Hammer of Sauron, The Tower of Sauron and The Black Hand Of Sauron. You, as Talion, must make your way to the top of the army with the help of Celebrimbor, which inhabits your body due to the ritual The Black Hand performed. On your way, it will require smarts, technique and all out killing of Uruks, Ghûls and an onslaught of Captains which some can be challenging at first. Talion must go through the Black Captains before it is too late.

If you didn’t know, the game is set in the Tolkien/Lord of the Ring universe and is filled with great stories. As you progress, you also get tons of information about the world and everything in it through collectibles and so on. I really enjoyed the story from beginning to end. The characters have great back stories and, once again, Troy Baker plays a fantastic role when it comes to Talion. In my opinion, everything meshes well together and really makes a great impact on the game, there wasn’t a time that I felt pushed away from the lore or the story.

The draw distance are amazing. Standing tall on one of the forge towers, you can see almost end-to-end. Textures are well pronounced and the characters are astounding, the Uruks are all gruesome in their own way. Cutscenes are marvelous to look at and does give you a sense of the emotion portrayed in the scene.

The world of Middle-Earth, in the context of the game, you are located in Mordor and is separated into 2 sectors. The world is filled with tons of stuff to do and there’s always something to surprise you. You travel between Udûn and Núrn to perform missions and what-not. I enjoyed the world a lot. The landscape is beautiful and every section has its own unique feel to it. When I started the game, this is the first thing that caught my attention. The map doesn’t overwhelm you with details and traveling is easy.

As like most games, Shadow of Mordor has a progression system for your skills. So, when you start off, hordes of enemies can become quite overwhelming and you will die a lot. Combat at first is pretty basic: one button to attack, one to stun, one block and one to vault over enemies. After a while going through crowds gets easier when you master these combos and get new abilities. I heard a lot of people complaining that this part becomes repetitive after a while, but I never felt like it was the same action over and over. Each group of enemies feel unique because you can have different troop types in the mix. Berserkers, General Infantry and Shielded Infantry are the usual suspect that requires there own unique approach to take down. I really appreciated this type of game mechanics because it’s different from your shoot-em-up type games and I really felt challenged in some battles. 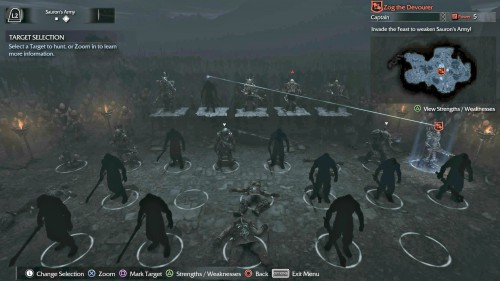 This feature is what got me interested in Mordor and it doesn’t disappoint. Sauron’s Army is composed of Captains and Warchiefs and can be promoted if the opportunity presents itself or by the passing of time. You get certain missions which you can kill these enemies or just have random encounters with captains. Further in the story, you also meet Black Captains which are big bosses. Later in the game, you get the ability to brand captains which just adds even more enjoyment to the game, you can even get them promoted to Warchief, which is useful in further missions.

This feature really adds life to the game and makes it a challenge because for some of the captains, you must understand them before attacking them. For example, I finished the story not too long ago and now just playing the game for fun. I wanted to get to a captain in the distance, which he was located in a base not too far from me, and brand him. In this instance, I didn’t familiarize myself with his weaknesses and paid the price: death. After looking at his sheet, I then realized that he had a power level of 20 and got killed by him a couple more time, guess what I’m doing after writing this review?

Also an intriguing thing that happened to me while playing: I’m finishing up a power struggle mission and all of a sudden, I’m surrounded by not one but 3 captains. I immediately bolted from that location. These are the fun little things that happen that keeps you on your toes. Never underestimate the enemies.

Collectibles come in the form of artifacts and Ithildins for the most part. These items can be found on the map and can only be seen  when in wraith mode. These collectibles will give you a ton of information concerning Mordor, Middles Earth an anything your little heart desires to know about the universe. I found these really interesting to read and left me wanting to know more. The only thing is as soon as you get a Forge Tower unlock, you know immediately the location of the collectibles and becomes really easy to find if we compare to other games that have collectibles.

As you progress, you unlock ability points and a few more types of upgrade to help you along the way. One of the biggest one, I would say, is the runes. Runes are acquires from Captains and Warchiefs. The higher the power level, the higher the rune level. These are then equiped to a free slot on your weapon to give power-ups like regain 20% health when performing a combat finisher and such. Each one of your weapons, Sword, Bow and Short-Sword, have this ability. With ability points, you can upgrade your combat or the wraith powers which become essential during the progression of the game. These upgrades will let you draw your bow faster, gain fighting abilities and so on.

These upgrades can seem slow to get at first and some only unlock almost at the end of the game. I did feel that some of the skills should have been available a bit earlier because when you unlock them at the end, well, you’re pretty much done and can’t use them in most battles.

The score for the game in general creates an awesome ambiance that is really fantastic to listen to while playing. It gets the mood right, especially in the middle of a battle. It revs you up for it and really integrates it well. On the PS4 version, some of the sounds come out of the controllers and is really well done. During load screens, you get some conversations between people on the controller and makes the loading time more enjoyable. The sound effects from in-game actions sound nice and I didn’t notice anything off that would make me think twice about it or pull me out of the game.

This game made me change my game of the year and I was driven to finish it because it has that appeal to it. There wasn’t a point where I got fed up with it and I always felt like what I was doing had a purpose. The visuals really made the whole thing enjoyable and audio wise, I like the fact that it helped the immersion of it all. Combat felt unique and I was always looking for a fight just to see what was going to happen, If you haven’t play Middle Earth: Shadow of Mordor, please do yourself a favor and pick it up, you will not be disappointed in Me-Time Gamer’s Game of The Year.