*Review copy was free with November PS Plus free games*

You play Isaac, a child just trying to survive his god-induced mother. As time advances and god becomes more demanding, she is finally asked to prove you faith and kill you child as a sacrifice. Isaac sees his mother barreling towards his room with a knife thru a crack in the door and tried too escaped before he’s met with his final destination. Doing so, he finds a hidden staircase which leads him to the basement where he must find an exit. From here, you take control of a naked Isaac and must defend yourself against monsters using your tears and collectibles you find.

I have to say, when I played for the first time I really felt bad for the kid. Even when playing I was still saying to myself how horrible it must feel to be him. Oddly enough, I don’t think I felt that way with other video games. But still, the mood does take a comedic turn when you start seeing the poop piles in the different rooms and lightens it up a bit. The game also offers unlockable characters you can play with.

The visual have a nice touch to them with its older looking 16-bit style graphics. The game is played as a 2D top-down dungeons crawler. They’re isn’t any frame rate dropping that I saw, neither was there any popping or weird stuff happening to the game that affects gameplay whatsoever. The levels feel unique because when you die and restart, the map is changed. The monsters felt unique in their own way.They all have a comedic or a gruesome look to them. 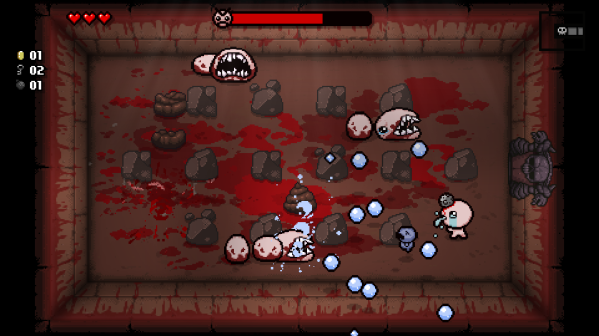 The game plays well and offers 2 methods for using your main attack which is great. With the left joystick or the D-Pad, you control the character around the different parts of the map. With the right joystick or X,O, Square and triangle buttons, you can attack enemies with your tears. You also have bombs you can use when needed. The basic controls work well and maneuver with ease. There isn’t much of a learning curve when playing. I really recommend playing on the Vita because you are closer to the game and it feels more natural on it. 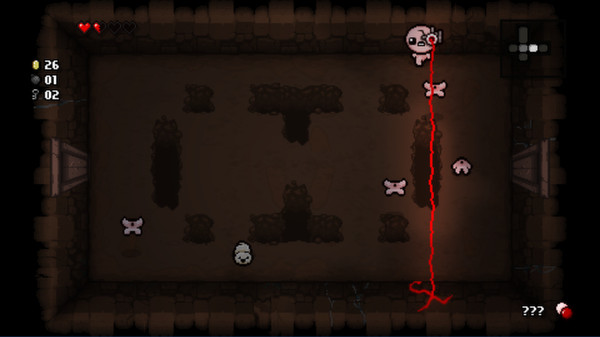 Now here is where the fun starts. You are able to find collectibles that will give you special powers that modifies Isaac’s body. What’s unique about this game is there are literally hundreds of them and you might not see the same one twice in a long time. This gives you the opportunity to try different approaches to the game. Also, keep in mind that some collectibles make you super strong and some can hinder you. There is collectibles that modified your main attack like the one I enjoyed a lot so far was the laser. Other ones are single use modifiers which will change some aspect. There was even one that look like a pills and when you take them, they remove health from your heart containers. There is so many of them that I still don’t know what they all do. In the start-up menu, you can even unlock challenges that you can play the game with like head trauma. Trauma shoot more tears but in the opposite direction you are pressing, in a circular pattern. Had fun with that one for a bit.

With all its weirdness and toilet humor, the game still pulls you in to play it over and over just by the sheer fact that it is never the same game twice. The story left me with an odd sentiment towards our protagonist both being awkward, but at the same time really pulling for the kid. The game is appealing for moments when you don’t have much time to play, not in a bad way. I would recommend this game for everybody that is looking for something different.