Time flies when you have lots of fun, and video games in the last 10 years had something for everybody. So many games have come and gone, some stayed in our heads more than others. On October 26th, 2014, we celebrate the 10th year anniversary of some say the best in the series. That game is Grand Theft Auto: San Andreas, the 7th GTA in the franchise. San Andreas comes to us after Vice City, another well-beloved installment of the collection.

This game introduced many features that were not there in earlier versions. One of my favorite one was definitely taking over gang territories. Turning the purple shaded neighborhoods to green was very satisfying. The also had gang graffiti, car customization and more which added to the gangland feeling of the game. You also had gambling, clothing and even a jetpack! Many hours of enjoyment were had.

San Andreas also gave us a range of well-known actors like Samuel L. Jackson as Officer Frank Tenpenny, James Woods as Mike Toreno, Charlie Murphy as Jizzy B, Chris Penn as Officer Eddie Pulaski and much more. The voice acting made the game what it is and the attitude of the actors creates the right feel of the game. The talent in this game is second to none and the only game in the series that get close is Vice City. 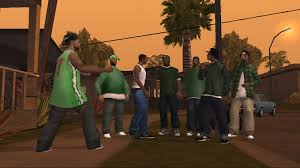 When we look at the story, it so well written and coherent. You play as Carl Johnson aka CJ, ex gangbanger trying to make it straight for the last couple of years. He’s called back home by his brother Sweet because their mother died in a shooting at the Johnson resident. When arriving home, he’s put back into the thick of it thanks to the crooked cop Officer Tenpenny. Eventually, he gets back home and he’s face with many more problem. He’s force to dive back into the gang life to help the Grove Street Families get back to its infamous notoriety that it once was. Many things stand in their way like the Ballas, backstabbing and dirty cops.

San Andreas offered the biggest open-world map the series offers to date and included the cities of Los Santos, Las Venturas and San Fierro which represented Los Angeles, Las Vegas and San Fransisco respectfully. Compared to the Los Santos of the GTA 5, it doesn’t look that great but at the time of its release it was fascinating and spectacular. Many landmarks of these cities were recreated in the game and were fun to discover like area 51, known as area 69, and the Hoover Dam or Sherman Dam in San Andreas. Traveling across the map took time but there weren’t much dull spots when doing so. You could Do burglaries one minute and win big in the casinos the next. There was always fun to be have.

This game has so much to give and just the sheer size of the game will keep you busy for a while. I didn’t even talk about all the vehicle options that this game introduced, around 240 to be exact. The game can now be played on a lot of consoles and tablets, and today was the release of the Xbox 360 version. With a Metacritic score of 95 and winning many Game of the Year in 2004, this game changed gaming for the better. To today’s standard, the graphics are outdated but still is very enjoyable.